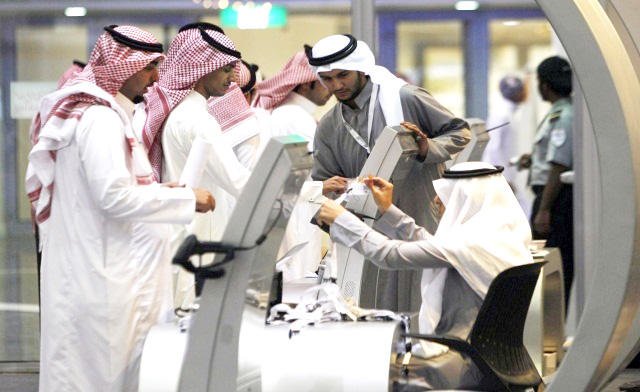 Saudi Arabia has made its debut in a global “talent ranking” — beating almost 30 countries including France, Malaysia and Japan.
The Kingdom took the 26th spot in the IMD World Talent Rankings, playing to its strengths as an expat destination with low tax benefits, employee security and above-average pay.
It also scored highly in terms of educational investment, which now accounts for 8.8 percent of the country’s gross domestic product (GDP) — the highest in the world.
Christos Cabolis, chief economist and head of operations at Switzerland-based IMD, told Arab News: “This represents a good first result for Saudi Arabia. They have chosen to enter the rankings for the first time as they feel their economy is now in a good position. Clearly, Saudi Arabia would like to benchmark and they would like the capacity to compare.”
The annual IMD World Talent Ranking, now in its fourth year, assesses the methods countries use to attract and retain the talent their businesses need to thrive.
The rankings are based on a country’s performance in three main categories; investment and development, appeal, and readiness. These categories assess how countries perform in education, apprenticeships, workplace training, language skills, cost of living, quality of life, remuneration and tax rates. The study draws on an in-depth survey of thousands of executives from 63 different economies, and more than two decades of historical data.
Saudi Arabia performed consistently well in the overall rankings (26th) and the three main categories: Investment and development (26th), Appeal (31st) and Readiness (26th).
“Saudi Arabian investment in education is impressive — setting the groundwork for future homegrown talent,” said Cabolis.
In terms of education investment, Saudi Arabia is “above the mean,” added Cabolis.
The economist said: “Educational investment is definitely key in the Kingdom. They have put a lot of focus on supporting future generations through education.”
Saudi Arabia also has a competitive pupil to teacher ratio, with just 11 pupils to one teacher on average, which helped the Kingdom to climb up the rankings in the “investment” category.
The report noted that the country’s investment weak spots were its low female workforce representation rates and employee training.
In the “Appeal” category, the Kingdom was rated well for foreign highly skilled personnel but lagged on attracting and retaining domestic talent.
In the “Readiness” category, Saudi Arabia performed well for labor force growth and international experience but trailed on skilled labor and finance skills.
Cabolis said that the Kingdom’s recent moves to relax laws such allowing women to drive, would help to lure more talent.
“The new laws and changes have been very much in the international news … skilled labor will definitely be drawn to the country,” he said.
Elsewhere in the GCC, Qatar and the UAE ranked 22nd and 25th respectively in this year’s World Talent Ranking.
Globally, Europe continues to dominate the rankings, with Switzerland, Denmark, and Belgium as the most competitive countries and Austria, Finland, the Netherlands, Norway, Germany, Sweden and Luxembourg making up the top 10.
Besides Mongolia and Venezuela, which capture the last two positions, the lower spots are dominated by Eastern European countries including Romania, and the Ukraine.