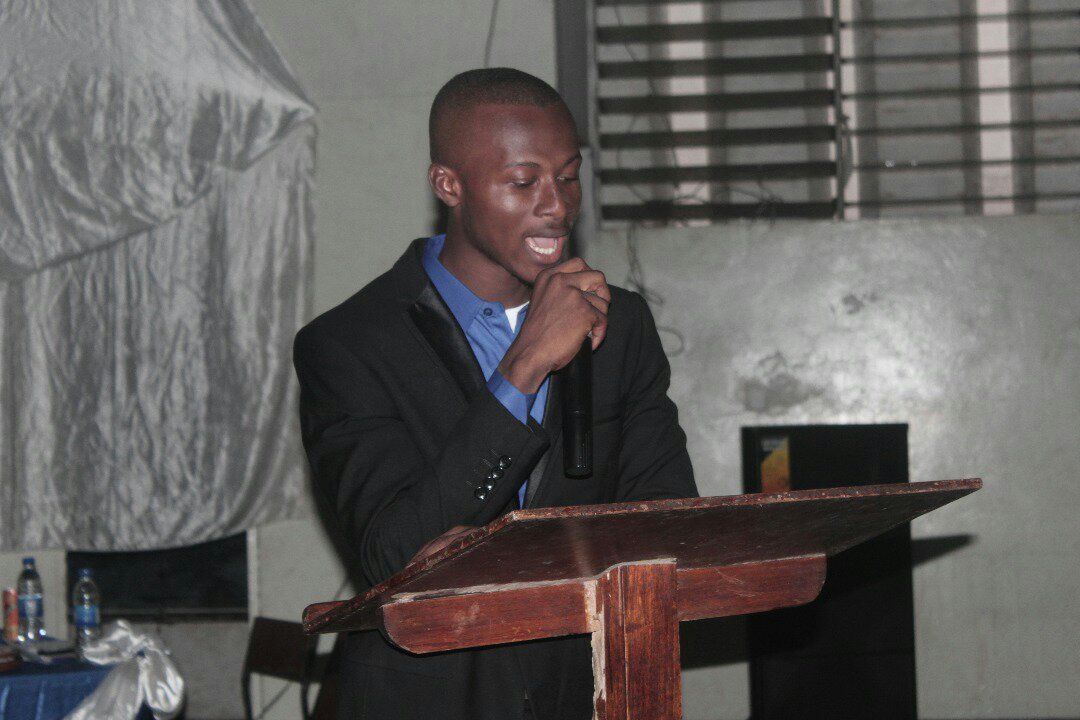 Speech from the (now former) President of the renowned Sierra Leone Union of Muslim Students in Sierra Leone (SLUMSIS)
“In the name of Allah, the Most compassionate,the most merciful. We thank Allah for guiding us towards this noble Deen. And I beseech His peace and blessings upon the noble messenger Muhammad (PBUH), his companions, his family members and all other prophets and messengers who have been sent by Allah.
My dear respectable elders,brothers and sisters in Islam, Assalamualaikum Warahmatullahi Wabarakatuhu (May Allah’s peace,mercy and blessing be upon all of you).
Indeed In every good deeds the legacy and impact will remain till eternity.
MEMBERSHIP AND ORGANIZATION:

The backbone of every membership organisation is it’s membership. To us as a union, every Muslim student in Sierra Leone is our member. But for record sake and effective dialogue based on commitment,we have registered members who are first in our priority list.
Since we took up the mantle, we have succeeded in increasing our membership to over 70% from different Junior and Senior Secondary Schools in not only our head quarter but in other areas across the country. I’m proud to disclose to you that we now have 16 more schools,making it a total of 35 schools within the Western Region. This is an increment of 84.2%.
In order to promote decentralisation and appreciate of the name of the union,we engaged in establishing branches in the provinces. By the Will of Allah, we established SLUMSSIS in two districts.
In the year 2016-2017 we established the Union in Portloko and Koinadugu District respectively. Our branch in Portloko can boast of 17 member-schools while Koinadugu District branch now have 15 member-schools in the district.
We have organized Symposia for our members, some were directly organized by the executives across the country while others were organized by our member schools which I call our embassies.
SLUMSISS also organized two Iftaar (fast breaking in the year 2016 – 2018 term of office) and the first one was a collaboration between NAMRIH and NUMS respective organizations.
We played 6 football matches with six different Organizations and we worn all!. Not forgetting the Trophy from the Gala put together by the Sierra Leone Anasheed Brothers (SLAB).
PROJECTS:

We have embarked on initiating projects as well as implementing them. We raised concern and facilities prayer materials like Quran,Kettle for ablution,Mats to pray,Mega phones to communicate and Hijabs for the sisters to perform prayers in over 35 secondary schools with the Western Region and the Provinces. We embarked on Meat distribution on the blessed Eid of adha last year. This project was sponsored by the Sierra Leone Muslim Missionaries Union.
TRAINING AND CAPACITY BUILDING:
To enhance the capacity and knowledge of our members,we engaged in a number of Capacity building and training both within and outside the union.
I am also proud to disclose that we have recently been granted 10 scholarships by the Islamic Online University (IOU).
Our members will secure Certificate, Diploma or Degree from IOU for Free after accomplishing the courses.
As we come this far to the climax of the leadership entrusted to us, I want to thank Allah for all His favours and goodness. I thank my parent for the great support, I thank my Vice President (Fatmata Ramadan Jalloh) for her relentless effort in overseeing her female compatriots, to the Imam board especially our chief Imam for his spiritual Guidance. Thanks to the rest of my executive for their committed and gigantic roles they played in promoting the union and it activities. Not forgetting our members for whom we were appointed to serve. To all school Jamaat and presidents, I thank you for propagating the union’s ideology in your schools. Thanks a million to the District coordinators for being there and coordinating the activities of the union in far corners of the country.
Prosperity will judge me if I fail to give special Recognition to our Dynamic and Erudite Islamic scholars who were always there to give us advises. Even at the middle of the night. You showed us that you are not only scholars but fathers As well. I say Shukran to our parents who gave us the courage and acceptance to be part of SLUMSIS and supported us financially to move on. Thanks also to all those who supported us with their finances. This shows that you are concern about the future of this generation. I want to loudly thank the Alumni who watched over us to simply ensure that we serve this union with due diligence. I can’t afford to say goodbye without thanking the Media Houses who have always been there to promote our ideas and our union. Thanks to the Voice Of Islam Radio,Star Radio, SLBC TV and Radio, AYV TV, Wetin Now Multi-media and all other media houses. We appreciate all of you.Sincerely, Words alone cannot express how happy I am for your selfless support.May Allah reward you with blessings of abundance.
You’ve made everyday spent in this union a memorable and beautiful one. That is why we rejoice and exclaim the bounty of Allah for His will and for making us accomplish this great accomplishment.
CHALLENGES:
SLUMSIS is not a profitable and non governmental organization, It was difficult but I keep bringing idea and initiatives to speedily develop the Union. Finance is one of the biggest challenges, Membership Commitment also and meeting with Christian School Administrations for acceptance of SLUMSIS in their schools.

As we exit as past executive and as new executive step in, I believe this is our time, our Chance to get and give back the best of who we are. Let’s throw the match, let’s bury our differences, set the past ablaze, start this new administration with the right people in the right positions, right friends, right networks, and the right groups even if it means you will have to be “alone. ” As time passes on, situations and circumstances will definitely change and I urge you to keep your head up high. Finally, Those whom we may have wronged, we ask for forgiveness and we hold no grudges against you either. I am glad we made it this far together.
Thank you for being there and for supporting me as the Sierra Leone Union of Muslim Students In Secondary Schools President 2016- 2018 TERM OF OFFICE.
Jazakumullahu Kair and Long live SLUMSIS.
Husein Hassan Kamara
(Former President of SLUMSIS- 2016-2018)