Islamic Preacher Shk Muhammad Marah has said that Sierra Leone is facing a regional and ethnic divide ahead of the election Run-off. 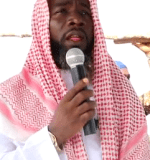 Islamic Preacher, Sheikh Muhammad Marah warns Sierra Leonean on regional and ethnic divide ahead of the Sierra Leone’s election runoff.
A renowned Sierra Leonean Islamic scholar and presenter of the program ‘Muslim Character’ on the Voice Of Islam Radio Shk Muhammad Marah has said that from all indications, it is apparent that Sierra Leone is facing a regional and ethnic Divide ahead of the March 27th election Run-off.
He affirmed that for far too long, Sierra Leone as a nation have enjoyed inter-marriages between tribes with strong ethnic and regional connections. These connections have greatly impacted the unity amongst Sierra Leoneans. But the type of politics the traditional parties want to practice ahead of the Run-off is not good for the country.
He appealed to Sierra Leoneans to stay united as Islam “tells us that we are one people and we are brothers and sisters in humanity”,quoting Quran chapter 49 verse 13 which spells out the oneness in humanity.
He encouraged everyone to avoid hate speech and stay united as it was what led to the Rwandan Genocide that cost the lives of Millions of Rwandans while many went for asylum in neighbouring countries.
Many people are of the view that the outcome of the March 7 elections suggest that people voted based on region and tribe but Andrew Lavalie from Institute For Governance Reform(IGR) is with the view that from the view that Sierra Leoneans did not vote on region and tribe adding that they voted based on policies as compared to past elections which were widely based on tribe and religion.
Reported by: Abdul Aziz Bah
www.sierraleoneislamicweb.com.