British Muslim communities remained both vigilant and defiant on Tuesday in response to an anonymous letter campaign that designated April 3 as “Punish A Muslim Day.”

The letters, which laid out a points-based system for violence against Muslims,  were mailed out to addresses across the U.K. in mid-March. Four South Asian politicians also received the letters, which called for people to commit acts ranging from pulling a Muslim woman’s headscarf to bombing a mosque.

British counterterrorism police are investigating the letters and have not yet identified who is responsible for them. London’s Metropolitan Police Service told the Evening Standard on Tuesday that there is “no credible information” to suggest that the hate crimes the letters encourage will actually take place.

Still, some British Muslims cautioned their communities to take safety precautions on Tuesday while traveling. Some Muslim women encouraged those who wear hijab to swap out the religious headscarves for beanie hats.  Others urged fellow Muslims to refuse to change their normal routine in response to the Islamophobic threat.

Tomorrow is April 3rd guys.. all Muslims be extra cautious. To my hijabi sisters, if you’re out and about tomorrow maybe think about swapping your scarf for a beanie or something. We have to be extra careful. Remind your friends and family. Stay safe

Didn’t think I’d get anxious about #PunishAMuslimDay but I currently am. Thinking of all Muslims, especially visibly Muslim women, across the UK who don’t have the privilege of staying at home to avoid getting horribly attacked. Please be vigilant.

There have been what’s app messages telling women, in particular hijabi women to stay at home, they are not from the Police. I would ignore the messages to go on a so called strike. It’s natural to feel worried& anxious. So report anything unusual to police or @TellMamaUK

It’s important that we continue as we would, so the haters & bigots don’t win! After terror related incidents most of us carry on as usual, & through #WeStandTogether intiatives we come together. This is no different. Counter terrorism police are looking into the letters. 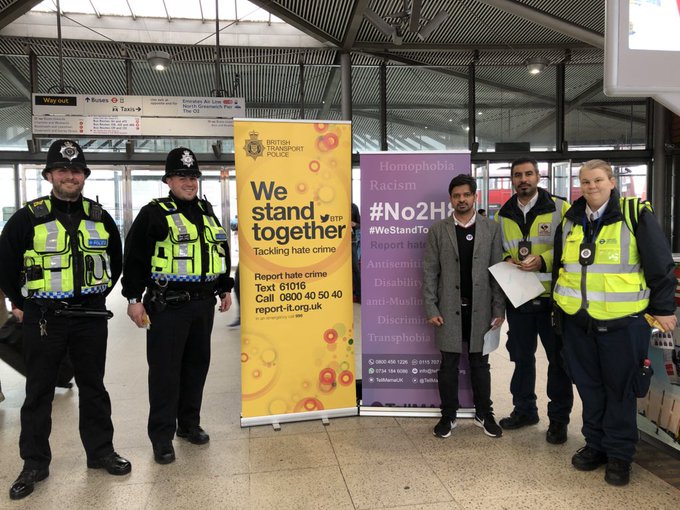 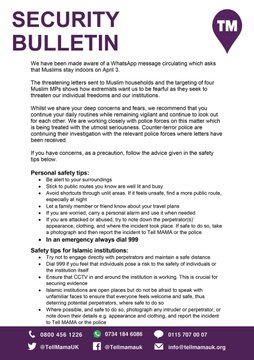 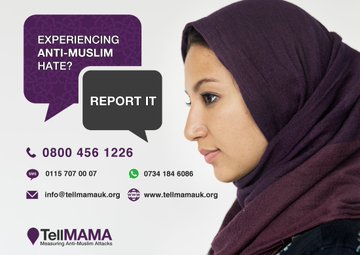 British Muslims also responded by promoting acts of love and kindness to counteract the “Punish A Muslim Day” letter’s message of hate.

Some people shared an infographic by artist and illustrator Marie Shirine Yener that suggests how non-Muslim allies can respond to Islamophobic harassment. 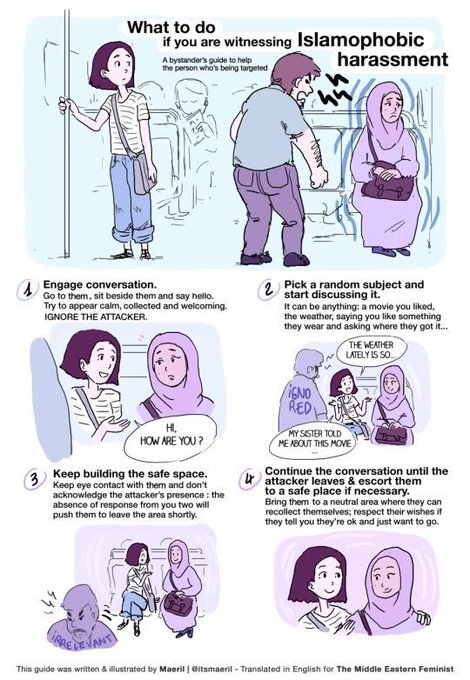 If you witness (non physical) islamophobic harassment today (or any day), this guide by @itsmaeril could come in handy #PunishAMuslimDay

Jamilla Hekmoun, a 24-year-old researcher from London, has been organizing a list of volunteers from around the U.K. who are willing to walk with or stay on the phone with Muslims who feel unsafe on Tuesday. Hekmoun told HuffPost that over 100 volunteers, most of them Muslim, signed up to help. She said that by around 8 p.m. local time on Tuesday, she and a friend who has helped organize the group received around 20 calls from Muslims who felt uneasy while walking on the street. She anticipated more calls as the night advanced.

“Even if we had just helped one person to feel safe it would have been worth it as everyone deserves to feel safe,” Hekmoun told HuffPost in an email. “Our goal was to make people in our community feel safe and we’re glad we were able to help.” 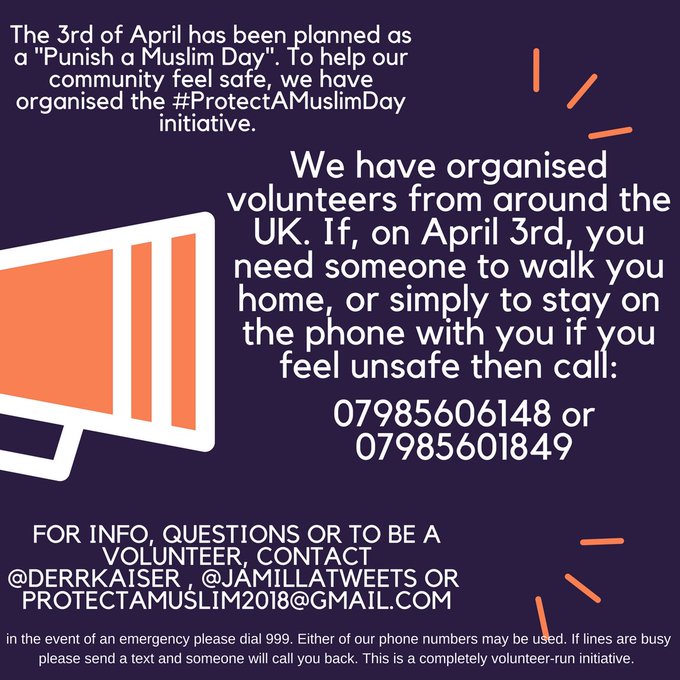 3rd of April has been planned as a “PunishAMuslimDay” To help our community feel safe, we have organised the #ProtectAMuslimDay initiative. We have organised volunteers from around the UK to help you if you feel unsafe on the day, call: 07985606148 or 07985601849. More info

The ‘Love A Muslim’ Day campaign, created by British Muslim activist Shahab Adris, encouraged interfaith allies to support their Muslim neighbors on April 3. Adris mimicked the “Punish A Muslim Day” letter’s points-based system, but replaced the acts of violence with acts of kindness ― buying coffee for Muslims, for example, or pledging to fast with Muslims during Ramadan.

On Tuesday, the advocacy group Muslim Engagement And Development, which Adris is involved in, set up five Love A Muslim Day events in cities across the U.K. to help encourage unity. 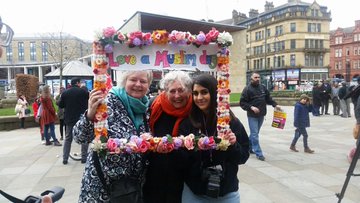 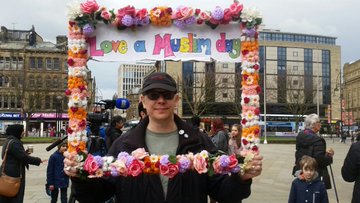 Bradford stands together in solidarity against horrible #PunishAMuslimDay#LoveAMuslimDay

HuffPost reached out to the FBI for comment on whether the “Punish A Muslim Day” threats extend to Muslims in the U.S., but did not receive a response.

American Muslims expressed their concerns about the day online and shared stories of resilience.

Tomorrow is April 3rd — or what some are disgustingly calling “Punish A Muslim Day,” — I can’t believe I have to say this…but to my Muslim brothers + sisters who visibly identify as Muslim. Please, please be careful.

I’ve been seeing Whatsapp messages, snaps, Facebook statuses & other folks telling Muslims, particularly hijabi women, not go out tomorrow because of “Punish a Muslim Day.” Every woman should do what makes her feel comfortable, but I am choosing to go about my normal day. Try me.

Having lived through some of the worst manifestations of islamophobia, violent attempts like #PunishAMuslimDay seem like just another day in the life of a Muslim. It’s also a reminder that we are resilient. We’ve survived bigotry on the streets & at the hands of institutions.

Bigotry can take a backseat today. We won’t stand for it. I’m going to go about my day as I do every day, serving and fighting for the people knowing that I have no apologies to make about what I wear, how I pray or where I’m “from from” (Brooklyn btw).

American Muslim comedian Dean Obeidallah pointed out that for many Muslims, Islamophobic harassment is not confined to one day of the year. The number of anti-Muslim hate crimes in the U.S. has recently surpassed the levels recorded after the Sept. 11 terrorist attacks.

Obeidallah said the anti-Muslim rhetoric spouted by politicians like President Donald Trump has caused American Muslims to worry about Islamophobic harassment on a daily basis.

“If April 3 was the only day that Muslims in America had to worry about being ‘punished,’ I would be overjoyed,” he wrote in an article for The Daily Beast. “The reality, however, is far different. To varying degrees, every day is “punish a Muslim” day in Donald Trump’s America.”

Shoulder to Shoulder, a coalition of 34 religious denominations united against Islamophobia, released a statement pledging interfaith solidarity with America’s Muslims.

“Hate has no home in the United States, and no one should fear for their safety because of how they look, where they come from, or how they pray,” the coalition stated.

To my Muslim friends: you inspire me & help me to keep believing in/working for an America that lives up to its ideals. Standing w/ you today in light of the gross anti-Muslim flyers floating the streets & the internets. #LoveAMuslim #WeAreAllMuslim #knowyourneighbor https://twitter.com/AspenJSP/status/980847582095196160 …

America does not do a good job of tracking incidents of hate and bias. We need your help to create a database of such incidents across the country, so we all know what’s going on. Tell us your story.

This article originally appeared on HuffPost.