DAQVAH Charity Foundation Launches its “Walk for a Widow Campaign”. 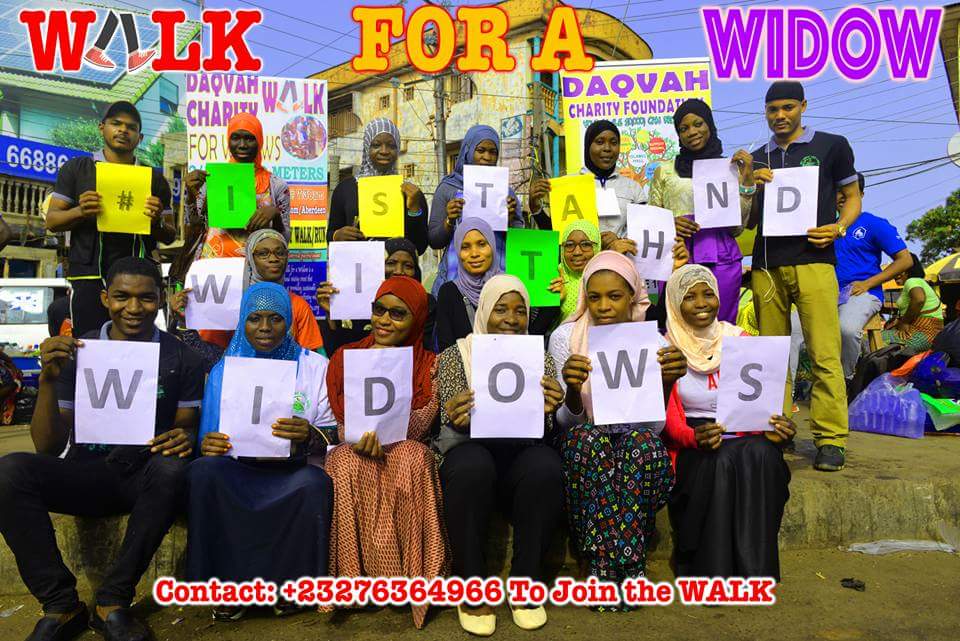 As part of its effort to support widows in the country, DAQVAH Charity Foundation at a Press Conference has launched the “Walk for a Widow Campaign” which is expected to raise funds to undertake this project. This event took place at the conference hall of the Sierra Leone Association of Journalist (SLAJ), on the 11th of April 2018.

Speaking at the launching ceremony, Sheik Ibrahim Barrie; producer and presenter at the Voice of Islam Radio says, among the many difficulties faced by widows in the world, four are most outstanding, which he classified as Psychological, Economic and Financial, Social and Cultural problems. Those challenges he says would only be solved or aided when men agree to marry widows. He continued by making reference to Prophet Mohammed (SAW) whom he says married widows and divorcees. He calls on Muslim men to emulate the footsteps of the Prophet and others who saw the need to marry widows.

In his statement, the Media and Administrative Consultant Sulaiman Stom Koroma says, because of the 11yrs civil war in the country, the Ebola Epidemic, Mudslide, accidents, and even natural death, has left thousands of women as widows. Most of these widows he says, always find it difficult to fend for themselves and their children. He continues to say, most of those women engage in odd jobs to take care of themselves. “This project will help to give grants and other aid to the widows, which will help to transform their lives,” he concluded.

Giving the Keynote address on the launch of the Walk for a Widow ampaign, the founder of DAQVAH Charity Foundation, Alhaji Abdul Rahman Jalloh says the foundation over the past three years has undertook series of charitable activities like providing fees to students ranging from primary to tertiary level; adding they have been giving mobile medical care, distributing food to those in need, construct wells and contributing greatly to orphan programs and many other activities. He continues to say that they are engaged in building schools which are primarily meant for giving free education in the areas where they will be built .

Alhaji Abdul Rahman Jalloh told journalists that the Walk will be on d 21st of April 2018 in Freetown, and over a thousand Muslims and non Muslims will participate in this walk. Proceeds from this “Walk for a Widow Campaign” will directly go to funding for widows all over the country, irrespective of their region and religion.