Abu Bakarr Muhammad Alie Jalloh from the Northern Province has emerged winner of the 5th National Quranic Competition Organised by the Foundation Of Islamic Information(SL) Ltd. 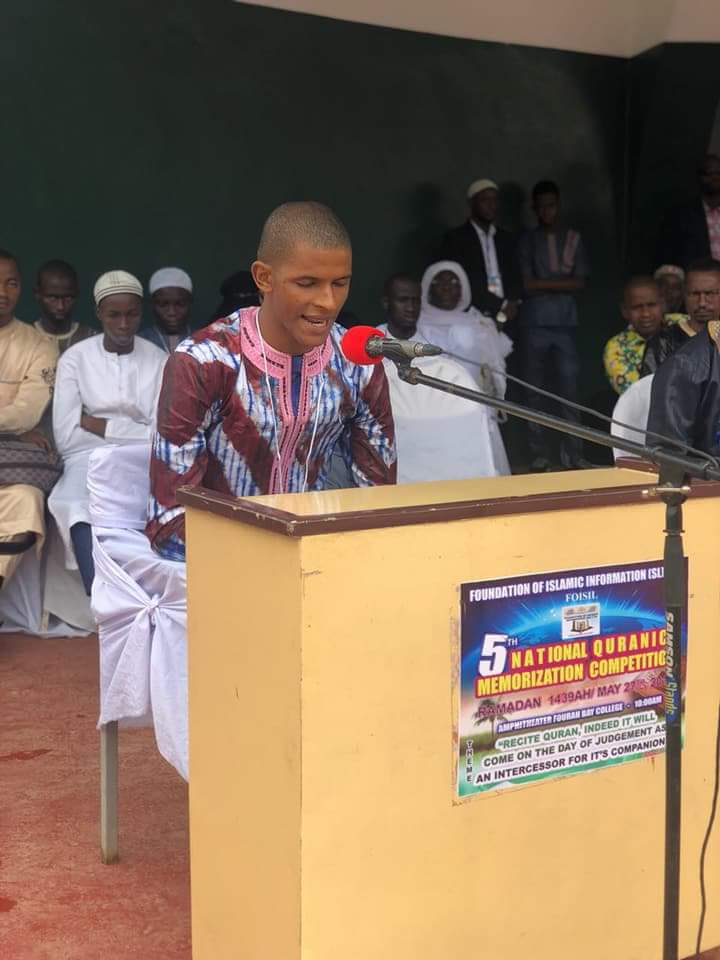 Since 2014, the National Quranic competition is organised annually by the foundation of Islamic Information(FOISL) Ltd. to identify talented people with proper recitation of the Holy Quran, motivate others to memorize the Quran and to identify a representative to represent the country in the Dubai International Quranic memorization competition.

The competition brought together representatives from the East, West, North and South of the country who competed on reciting 15,20 and 30 parts of the Quran.

Abdul Lathief Kargbo, the Director of FOISL said that they’ve succeeded in organizing the National competition for five consecutive years, they have brought Mufti Menk and Sheikh Mohammad Saad Noumani for the first time in Sierra Leone, they have also sent winners to Dubai to represent Sierra Leone on the International Quranic competition among other activities.

He also added that despite these successes, the foundation have also faced series of challenges with the most being finance, and the Organization is calling on the Vice President and the First Lady’s office to be involved in organising subsequent programs. He disclosed that because the competition has gained momentum over the years, they have started negotiation to initiate the Mano River Regional Quranic memorization Competition which will bring together the Mano River Union countries to compete in Quranic memorization.

While declaring on the opening of the competition, Dr Mohammed Juldeh Jalloh, Vice President of the Republic of Sierra Leone reaffirmed government’s commitment to support Education and that his government will ensure the inclusion of Arabic education in the University curriculum.

The First Lady of the Republic of Sierra in her address said that education is very important in Islam. She expressed dissatisfaction over the low participation of women in the competition and encouraged more women to come onboard to participate. She advised that in order to get more women participants, there should be a separate competition for them.

In the fifteen(15) parts (Half of the Quran) category of the competition, Mohamed Sallieu Kamara from Western Area emerged winner, seconded by Mohamed Sallieu Jalloh from the Southern Region.
In the twenty(20) parts(2/3rd) category, Ishmail Abu Bakarr Jalloh from the Western Area emerged winner and Mariam Idriss Sow who was the only female on the race came second.

At the end of the competition he gave a mind blowing 17 minutes performance on the recitation of the Holy Quran, replicating over 9 different Quranic reciters in the world.