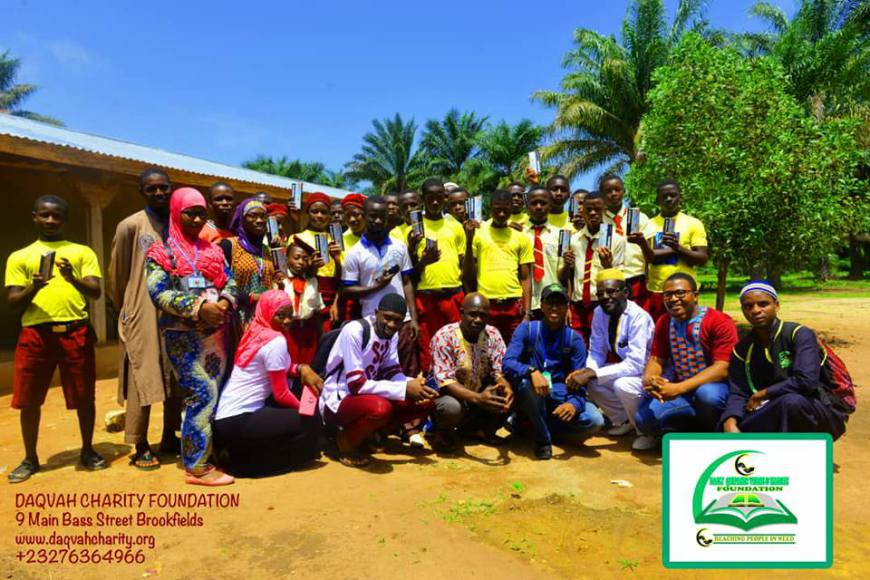 DAQVAH Strategic Planning Manager, Abdulai Ben Kamara, officially handed the Mathematical sets to the Ceremonial Chief of the Kaffu Bullom Chiefdom, Pa Kombrabai Sesay, the 2nd, who received the gifts unbehalf of the Paramount Chief, Shebora the 3rd. He said that as part DAQVAH activities, they normally distribute mathematical sets to less privileged pupils who will be taking the public exams so as to enable them to go through their exams successfully.

The Cermonial Chief thanked the organization for their kind gesture and assured that the pupils will use the sets for their intended purpose. “You have reduced the burden on us as elders of the community, because as soon as the BECE exam draws closer, we have lots of vulnerable pupils who normally knock at our door for us to help them purchase mathematical set,” the Chief continued.

The principal of Umar Bin Al Khatab Junior Secondary School, Mr. Mohamed Salieu Kamara received the items unbehalf of the pupils. In his statement, the principal expressed his gratitude to Allah and to the Foundation. Adding that, indeed the name of the foundation actually reflect in its activities. “I will ensure that all the pupils who are attempting their BECE Exams receive their packages from DAQVAH,” he ended.

DAQVAH RTU Lungi Coordinator, Sheikh Mohamed Amin Conteh while handing over the gifts at Rowana Junior Secondary School to the principal Mr. David B. Conteh, stated that even though the school is a christian school, the foundation selected it to be part of the schools that benefitted from the project, and that the foundation doesn’t only serve Muslims but humanity as a whole.

At the Ernest Bai Koroma Junior Secondary School at Mayaya, the Principal Mr David S. Conteh, who also doubles as the mathematics teacher said, “This is actually the right time for such distribution, as the students will be taking their exams next week and will also be taking mathematics exams. As a Maths teacher, I am currently teaching them construction, and over 70% of my students don’t even have mathematical sets, which makes it very difficult for them to even understand.”

Fatmata S. Kamara, a beneficiary, said, “I was not expecting such gift and I had no hope to get this set which will be used during my BECE exams. So I am indeed grateful that today, I have received this set freely from a charitable foundation.”

Mohamed T. Kamara, another beneficiary said, “I was not expecting the set and it’s really difficult to pass mathematics without a mathematical set. I am so lucky to be part of those who benefitted from thia project and this will surely serve as a motivation for me and it will contribute greatly towards my success during the exams”

The distribution was climax with a photoshoot of beneficiaries and DAQVAH staff and volunteers.