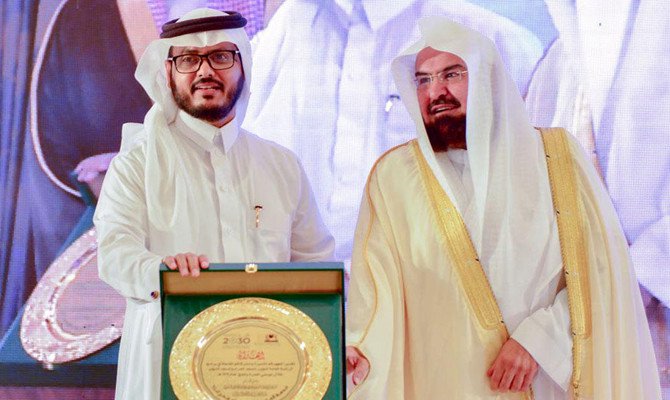 The Chief of the General Presidency for the Two Holy Mosques, Sheikh Abdulrahman Al-Sudais, was honored during an event to mark the occasion of the end of his Hajj season.

Al-Sudais praised all the efforts that contributed to the success of the Hajj season, lauding the officials who did their best to take care of the pilgrims and their needs during their stay in the holy cities.

He praised King Salman and the crown prince for their support. He also thanked the security officers for their efforts, which reflect the bright image of the sons of the soil.

He especially expressed his appreciation to the media for highlighting the efforts exerted to serve the Two Holy Mosques.

Speaking at the event, Brig. Abdullah bin Eid Al-Qurashi, director general of Civil Defense, applauded the role played by various institutions for serving the guests of God during this Hajj.

On Sunday, Makkah Gov. Prince Khaled Al-Faisal, said during a meeting with the heads of consular missions in Jeddah that Saudi Arabia would do its utmost to serve pilgrims. The government would ensure they enjoy more comfortable and easier Hajj and Umrah trips, he said.

He said King Salman has established the Royal Commission for Makkah and the Holy Places, chaired by the crown prince, to facilitate Hajj and Umrah procedures and develop the holy places.