ueensland Senator Fraser Anning has been widely condemned for his “disgusting” comments in the wake of the fatal Christchurch mosque massacre. In a media statement issued this afternoon, Senator Anning said the attacks highlighted the “growing fear over an increasing Muslim presence” in Australian and New Zealand communities.

The Senator went on to claim the real cause of the bloodshed that’s left at least 49 people dead is New Zealand’s immigration policy. Australian Prime Minister Scott Morrison has called an Australian senator’s comments on the Christchurch mosque shootings “disgusting”. On the other hand, Senator Anning said:

“I am utterly opposed to any form of violence within our community, and I totally condemn the actions of the gunman.”

“However, while this kind of violent vigilantism can never be justified, what it highlights is the growing fear within our community, both in Australia and New Zealand, of the increasing Muslim presence.”

He went on saying:

“The real cause of bloodshed on New Zealand streets today is the immigration program which allowed Muslim fanatics to migrate to New Zealand in the first place.”

Senator Anning went on to say that while Muslims may have been victims of attacks, he claimed they were also perpetrators. and blamed deaths on “the entire religion of Islam”. He said:

“It is the religious equivalent of fascism.”

He ended with a passage from the bible and said those who followed a violent religion that called on them to murder “cannot be too surprised when someone takes them at their word and responds in kind”.

While evidence of him sharing that statement has been removed from his social media accounts he tweeted:

Does anyone still dispute the link between Muslim immigration and violence?

7,662 people are talking about this

It took only took minutes for social media to blow up in outrage. Among the criticism was a rebuke by Prime Minister Scott Morrison, who tweeted:

New Zealand, like Australia, is home to people from all faiths, cultures and backgrounds. There is absolutely no place in either of our countries for the hatred and intolerance that has bred this extremist, terrorist violence and we condemn it.

The remarks by Senator Fraser Anning blaming the murderous attacks by a violent, right-wing, extremist terrorist in New Zealand on immigration are disgusting. Those views have no place in Australia, let alone the Australian Parliament.

4,633 people are talking about this

“The remarks by Senator Fraser Anning blaming the murderous attacks by a violent, right-wing, extremist terrorist in New Zealand on immigration are disgusting…Those views have no place in Australia, let alone the Australian Parliament.”

“While families in Christchurch mourn for loved ones they’ve lost, an obscure Australian Senator saw this act of terrorism and tragedy as an opportunity to blame the murder victims.”

On Sky News, political journalist Kieran Gilbert said someone with those views did not belong in parliament. He said:

“I find him absolutely disgraceful…It’s disgusting.”

British journalist Piers Morgan also lashed Senator Anning, saying he felt “blind fury” at the remarks. Many others chose not to share the statement at all.

Fraser Anning should be expelled from the Senate forthwith. No ifs no buts. A disgrace to the country.

80 people are talking about this
View image on Twitter 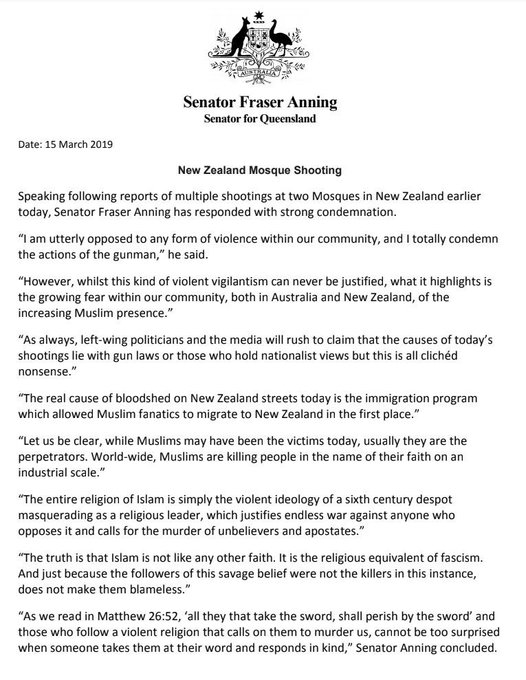 Are you f*cking kidding me???? This guy is an Australian senator? SHAME on you @fraser_anning.
I hope your fellow Australians respond to this disgusting statement with the same blind fury I am feeling.

Following the backlash, Senator Anning has continued to defend his comments. In another tweet he doubled down saying today was not an “excuse” to forget lives lost to “Islamic terrorist attacks”.

May Allah (SWT) keep this whole Muslim Ummah protected and may those in injury and pain be recovered as soon as they can. Ameen. Spread this message and let others know.