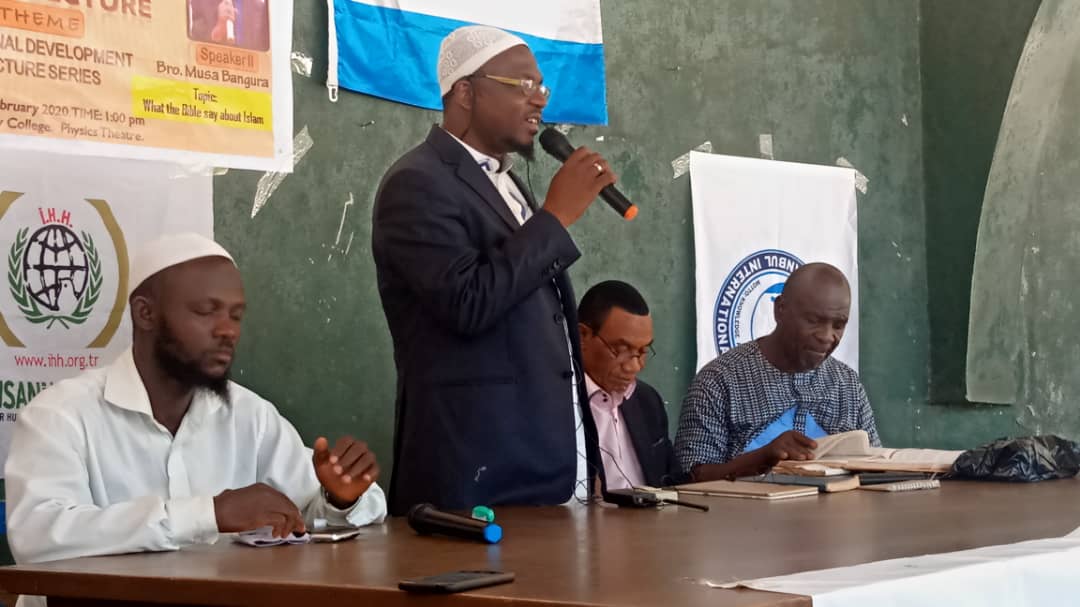 The public lecture was Themed ” PERSONAL DEVELOPMENT LECTURE SERIES “. It’s geared towards ensuring that young people especially Muslims, inculcate the fundamental values of personal development and entrepreneurship. Thus, the program was full of youths_ both Muslims and non-Muslims.

According to the Director of Dawah Programs, African Humanitarian Relief Foundation, Abdul Qadir, said they were very happy to work with Sierra Leone Islamic Web Organization (SLIWEB) and Independent Youth Forum (IYF) with the outcome of the Public Lecture. He further said they spent almost Four Thousand Dollars to organise a total of ten Public Lectures in different places including the one at Fourah Bay College FBC. He ended by saying that their aim was to propagate Islam that was why they organised such program.

Managing Director for the Sierra Leone Islamic Web Organization (SLIWEB), Abass Ibrahim Kamara started by thanking Allah for His acceptance and he appreciated African Humanitarian Relief Foundation and Independent Youth Forum for organising a very successful event. He further said, he was very touched and motivated by the speakers. He ended by saying all what he had learnt from the Public Lecture could enable him to become a very successful Islamic Entrepreneur.

The Executive Director, Independent Youth Forum, Alusine Conteh said in spite of the challenges, the program was a very successful one because they were able to get the speakers on board, and the attendees appreciated the program so much.

Brother Musa Bangura, a reverter who spoke on the topic” What the Bible says about Islam?”, gave series of verses from the Bible which talk about Islam, the prophecy of Muhammad (PBUH), Islamic prayer in the Bible and ablution. He further spoke on his experiences as a pastor and how he initially hated Islam so much.
One of the attendees, a student from Limkokwing University, Aminata Suma expressed his satisfaction about the Personal Development Lecture Series.”I never regretted coming here to witness this program because the two lecturers were very inspirational. I have learnt many things with regards personal development; if only I put them to practice, I will become successful. I’m also impressed with the speaker who told us that anyone who does not respect Jesus is not part of Islam because Islam gives maximum respect to all the prophets that Allah sent”.

❗Do you have any Islamic news or articles you want to share with us?🗒