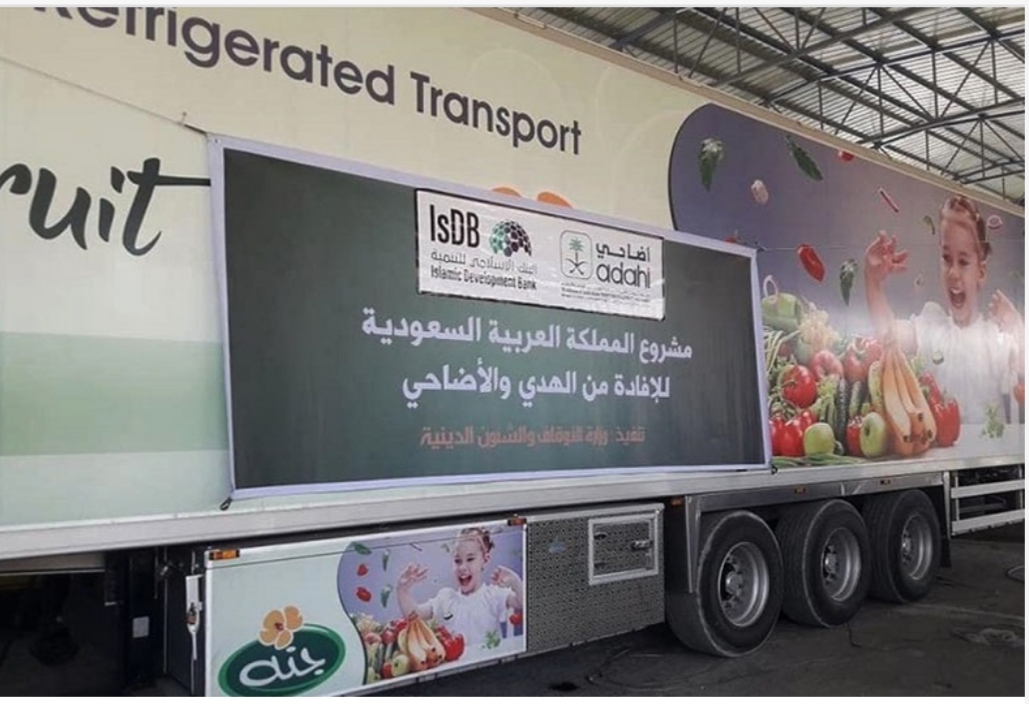 In 2019, the Saudi Project for the Utilization of Hajj Meat Project donated and distributed meat from about a million livestock in 84 hours

Jeddah: In 2019, the Saudi Project for the Utilization of Hajj Meat Project donated and distributed meat from about a million livestock in 84 hours to beneficiaries in 27 countries of the Muslim world with the distribution starting with the poor in the Haram area of Makkah.

According to a report published by The Islamic Development Bank (IsDB) President, Dr. Bandar Hajjar, the Utilization of Hajj Meat Project launched 37 years ago, in 1403AH/1983G, and the IsDB is managing it on behalf of the Government of the Kingdom of Saudi Arabia.

The Project has helped facilitate the performance of rituals, protect the environment of the holy sites from pollution, and prevent the waste of meat by providing it to the needy. Providing food to the poor and the hungry receive special attention from the Kingdom of Saudi Arabia. IsDB is working with the Kingdom to expand the scope of the Project to include fighting hunger in the Muslim world and the IsDB Member States.

After the issuance of the fatwa authorizing the use of sacrificial meat for distribution to the poor of the Haram as well as among the Muslim poor, the Kingdom established this outstanding Project.

Besides, meat is distributed within the Kingdom through 250 charities which are accredited by the Ministry of Labour and Social Development and which have refrigerators to preserve meat and freezers to transport it to the deserving beneficiaries.

When the Corona pandemic emerged in the Kingdom, the Project participated in the campaign launched by the Governor of the Makkah Region, Prince Khalid Al-Faisal under the name of “Birran Bi Makkah”, to help the needy.

The Project, in cooperation with charities, neighborhood associations, and Awqaf in Makkah Al-Mukarramah, has distributed 15,000 carcasses or 150,000 kilograms of meat; nearly 13,000 carcasses were also distributed to various charities within the Kingdom.

The total amount of sacrificial meat distributed from the beginning of the Project until the 1440H season has reached approximately 33 million livestock to approximately 100 million people from the Muslim world.

The Project is supervised by ten Government Agencies which are:

The Kingdom of Saudi Arabia’s support for the Project is unlimited. In order to facilitate the performance of the rituals and expand the project’s role in providing food to the poor, the Kingdom has allocated more than two billion riyals to establish new slaughterhouses equipped with an integrated automatic system for skinning and meat cleaning, cutting, transport, packaging, preservation, distribution, and canning, as well as a renewable energy plant, a wastewater treatment plant and a central complex to accommodate 1.5 million carcasses with the possibility of expanding site capacity to about five million carcasses.

This is upon the instructions of the Custodian of the Two Holy Mosques King Salman and His Crown Prince Mohammad bin Salman- may Allah protect them.

Studies and designs have been prepared and offered for bidding. Other forms of the Kingdom’s support for the Project include exempting over 20,000 project employees from visa fees, support for livestock voucher purchases, in addition to other forms of support.

The Project’s Management team is working with the IsDB strategy and transformation department to prepare a comprehensive study to expand the Project’s role as a tool to be utilized by the Kingdom of Saudi Arabia to fight hunger in the Muslim world.

According to the Global Hunger Index (GHI), the number of hungry people is increasing, especially in Sub-Saharan Africa and East Asia as a result of wars, armed conflicts, droughts, climate change, and the spread of diseases and epidemics.

Also, the number of people dying from hunger is increasing. Therefore, the Project launched several programs, such as the Charity, Birth Sacrifice, and Will Programme, intending to increase the number of livestock distributed among the poor and needy suffering from hunger.

The Will Programme allows a person to sign a contract with the Project to allocate a certain amount of money over many years for the Project to slaughter livestock for the testator after his or her death.

“I take the opportunity of the blessed month of Ramadan to invite my brothers and sisters in the IsDB Member States and in Muslim communities in non-member countries to help support the Project by participating in its various programs.

The aim is to increase the number of livestock that are being used so that the Project can reach larger numbers of deserving beneficiaries.

It is Allah Almighty who will reward those who help the Project fight hunger in the world,” the IsDB Dr. Bandar Hajjar concluded its report.

IsDB is an international development financing institution established 47 years ago at the initiative of the Kingdom of Saudi Arabia to provide economic and social support to the Member States and Muslim communities in non-member countries.

Its membership includes 57 countries, 21 of which are among the least-developed countries in the world. The IsDB Member States span four continents, namely Asia, Africa, Europe, and Latin America. Its operations and activities cover vast regions of the world, from Indonesia in the east to Suriname in the west, and from Uzbekistan in the north to Mozambique in the south.

The IsDB serves 1.7 billion Muslims, i.e. one of every five people worldwide, and the Kingdom of Saudi Arabia is the largest shareholder in IsDB capital, with approximately 25 percent of the capital.

The IsDB has been granted the highest credit rating from the three largest international rating agencies and enjoys high credibility at the local, regional, and international levels.