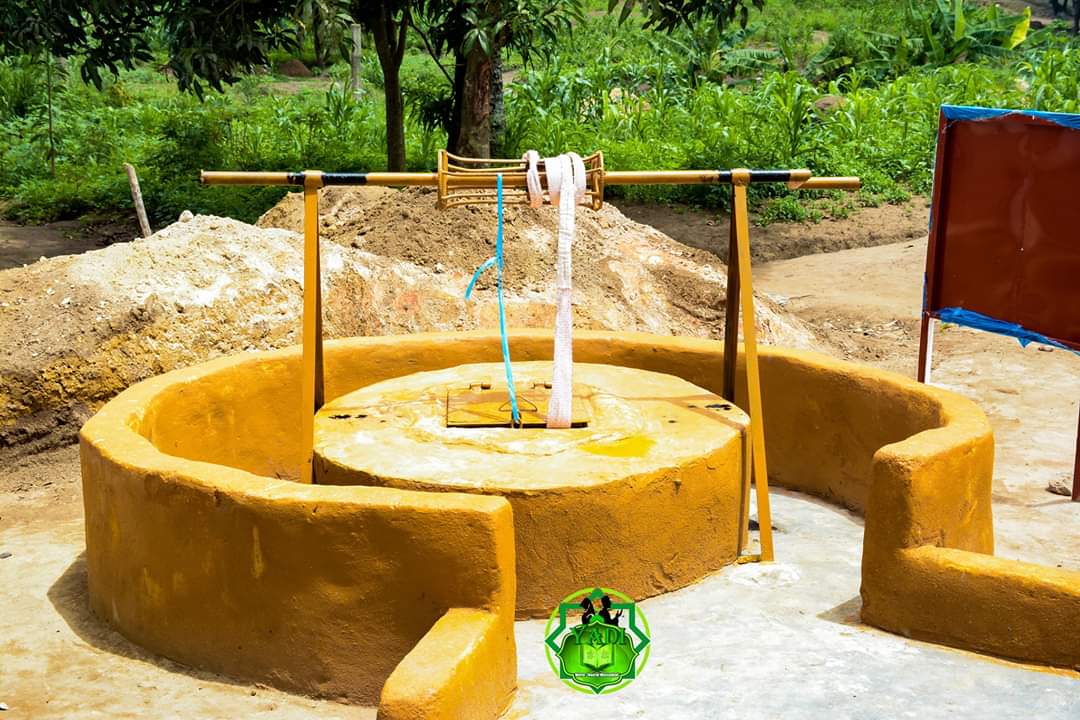 The management of Youths in Action for the Development of Islam (YADI) has on Sunday 7th June, 2020 unveiled and donated a seven (7) meters deep water well to residents of the Matainkay Community, Waterloo. In his statement, the Founder and Executive Director of YADI, Amadu Wurie Barrie, submitted that this is the 6th volume of their annual Ramadan Charity Project (RCP), which targets various vulnerable and needy people. He noted that the establishment of “Al-Kawthar Water Well” is a perfect tradition of Prophet Muhammad (pbuh) and serves best during the Holy month of Ramadan. Brother Wurie Added that amidst the Corona Pandemic, water is a paramount need as a weapon against the deadly virus to a deprived community such as the Matainkay Community. “Many organisations have been donating soap, masks and other items to vulnerable people, but most forget to consider the fact that these items can not be effectively utilized if water is not available”, he added.

In his speech, the Project Coordinator, Foday Conteh, after expressing his apprciations to the community people, explained that RCP is an annual activity of YADI that is happening for the sixth time. He furthered that in previous years, YADI has reached out to numerous vulnerable and needy people that included, deprived communities, orphanages, Quran memorization centers, hospitalized patients, physically impaired and more. According to him, YADI is not financially independent, but with the little that the mebership puts together and the considerable support of other compassionate Muslims, we have been able to keep this tradition alive. Mr. Conteh advised that the community members take good care of the well to ensure that it is not mismanaged. He concluded by informing all that the project was facilitated by the YADI executive with support from Sheikh Farouk Adam Bah, YADI’s Consultant for Religious Affairs.

In his brief note on he project implementation process, the Project Supervisor, Mr.Mohamed Samura disclosed that a visibility study to Waterloo was undertaken on 6th May 2020, which resulted in the selection the Matainkay Community as the project target site. The site, on which the well was dug was donated by one brother Mustapha, he mentioned. “The Community is said to have about 600-700 residents, and is faced with a huge challenge of water accessibility, especially during dry seasons”, Mr.Samura submitted. He continued that the digging commenced on the 16th May, 2020 and was completed within two weeks.

One of the community elders, Mr.Mohamed Kargbo thanked YADI for their throughtfulness in undertaking such a project. He explained that the community faces water challenges more direly during the dry seasons. He added that he cannot be able to express his feelings in words, but will always remember the pioneers and supporters of the project. He further affirmed that the water from the well was proven to be usable for various purposes including washing, laundering, cooking and even drinking. He concluded by urging YADI to remember other communities in such goodnesses.

The Media Officer, Fatmata Ramadan Jalloh briefly explained that the RCP is just one of YADI’s projects, adding that YADI which was founded on the 5th May 2014 undertakes dawah and education activities, supports sisters to take up hijab and also undertakes the National Islamic Awards (NIA). We love serving humanity and will continue our efforts towards having a brighter future, as our motto goes.